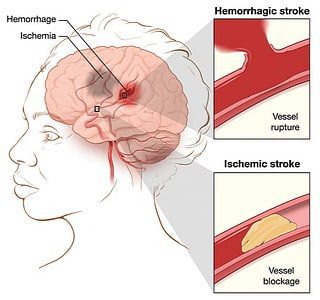 Studies show Hyperbaric oxygen therapy (HBOT) can possibly heal the brain after a stroke. This is great news for stroke recovery victims seeking treatment for stroke, who now have a way to deal with the long-term effects of their injury. A stroke occurs when brain cells no longer receive the oxygen and nutrients they need to survive, due to a blood vessel that either becomes blocked or bursts. It can also be the result of traumatic brain injury, particularly a concussion. When this happens, the area of the body corresponding to the affected cells becomes dysfunctional.

Although prominent brain tissue of stroke victims may have irreversible damage, medical studies show that HBOT for stroke recovery can be effective in stimulating the dormant cells that surround the damaged area. These dormant cells, known as the ischemic penumbra, are chiefly responsible for the majority of post-stroke dysfunction. Oxygen therapy can revive these cells, and in turn, restore a dramatic portion of the functionality caused by the stroke.

Is HBOT for Stroke Victims?

Although some tissue in the brain may be permanently damaged due to a stroke, often, the surrounding tissue merely lies dormant, and can be stimulated back to activity with HBOT. Because this dormant tissue is responsible for a significant portion of a victim’s dysfunction, Hyperbaric stroke recovery, can often have dramatic results in treatment of stroke patients.

HBOT Can Treat the Root Cause of Strokes

Treating stroke early is important.  This is the time when ischemic areas of the brain area at it’s crucial stage,  life or death.  Studies show that Hyperbaric Oxygen Therapy (HBOT) can have positive effects on damaged nerve tissue reducing the risk of further injury.    Not only can HBOT pressurize the ambient environment to better allow oxygen flow to the brains affected areas  but it will also  wake up the dormant cells (ischemic tissue, penumbra) , bringing them back to life. In addition Forcing oxygen into the  ischemia and hypoxia areas of the brain, hyperbaric therapy reduces swollen tissues allowing more blood flow.

Get Your Life Back Again – Hyperbaric Stroke Recovery

With stroke patients, little successes make all the difference. HBOT helps patients realize the hopes they have for their future. Often, they can regain important functions they may have once taken for granted, such as dressing themselves or going to the bathroom unattended. With HBOT, patients can overcome the effects of a debilitating stroke and regain their dignity.

During the treatment, the levels of oxygen in the chamber cause an increase in the amount of oxygen dissolved in the blood plasma and fluid of the body. This saturates and nourishes the body’s tissue with oxygen, even in the absence of red blood cells. The chamber pressure increases the levels of oxygen to all parts of the body. Besides stimulating the dormant brain cells, HBOT  also had been shown to cause new nerve cell growth in the brain (Neurogenesis) and regenerate new blood vessels (Angiogenesis) to the affected areas of the brain. This helps repair and restore key tissue structures, including injured neurons, glial cells, and the extracellular matrix.

Often, stroke victims are not the first to consider therapy. If your loved one has been the victim of a stroke, help that person take the first step for relief, and contact us today. In our humble opinion, there is no other place like ours. Let us help your loved one regain his or her independence.